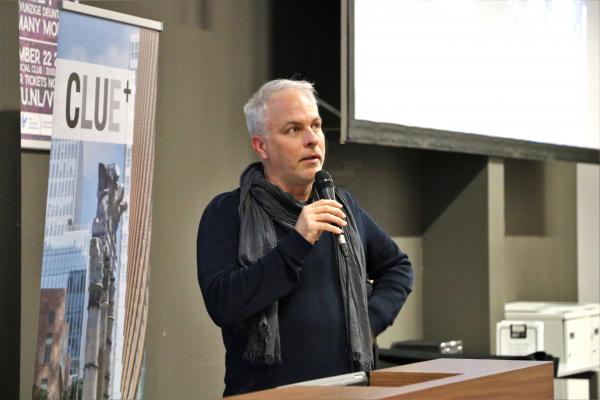 With reference to three approaches to the experimental aesthetics of abolition ecology—those of Thirza Jean Cuthand, The Otolith Group, and Black Quantum Futurism—this presentation discusses current modelings of radical Indigenous and Afro-futurisms and worlds-to-come founded upon social justice and environmental flourishing. Where radical imagination meets radical praxis is in the material forces of solidarity, the political form of belonging, more than ever necessary today in the collective battle against international fascisms and global neoliberalisms. While acknowledging the bankruptcy of Eurocentric universalisms, this presentation defends approaches to insurgent political alliance beyond identitarian fragmentation, including within and through political aesthetics of abolition—ultimately of racial and colonial capitalism.

T. J. Demos is Patricia and Rowland Rebele Endowed Chair in the Department of the History of Art and Visual Culture, University of California, Santa Cruz, and Director of its Center for Creative Ecologies. He writes widely on the intersection of visual culture, radical politics, and political ecology—particularly where it opposes racial and colonial capitalism—and is the author of several books, including Beyond the World’s End: Arts of Living at the Crossing (Duke, 2020), Decolonizing Nature: Contemporary Art and Political Ecology (Sternberg, 2016), and Against the Anthropocene: Visual Culture and Environment Today, (Sternberg, 2017). Demos curated Rights of Nature: Art and Ecology in the Americas, at Nottingham Contemporary (2015); Specters: A Ciné-Politics of Haunting, at Madrid’s Reina Sofia Museum (2014); and Beyond the World’s End at the Museum of Art and History, Santa Cruz (2019). In Spring 2020, he was a Getty Research Institute Fellow, and during 2019-21 directed the Mellon-funded Sawyer Seminar research project Beyond the End of the World. He is working on a new book on radical futurisms.

Made possible by the History of Art Graduate Student Association (HAGS).

​Register at go.osu.edu/tjdemos
If you require accommodation such as live captioning or interpretation to participate in this event, please contact Allison Buenger at buenger.2@osu.edu. Requests made two weeks before the event will generally allow us to provide seamless access, but the university will make every effort to meet requests made after this date.