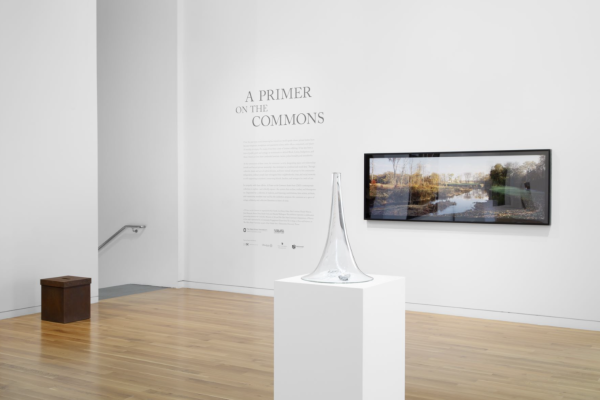 In autumn 2020, I offered a graduate seminar in partnership with the Columbus Museum of Art (CMA), funded by a Global Arts + Humanities Discovery Theme Grant — a connection forged by Associate Professor Kris Paulsen, who spearheaded the project and led the grant team. Although I had benefited from two years’ experience as CMA’s inaugural Roy Lichtenstein Curatorial Fellow, the seminar was entirely experimental. Titled “Commoning the Museum,” it was to engage students as collaborative co-curators of an exhibition drawn from the museum’s permanent collection, and in that sense (and in others as well), to reroute works of art from their usual destinations. Rather than center the disciplinary concerns of art history and/or curatorial studies, the seminar introduced students to a field of political arguments and activist struggles located on the grounds of the commons — a term my students defined as “designating spaces and relationships outside and beyond private ownership.” Relatedly, we would explore legacies of the enclosure of the commons (i.e., the privatization of previously uncommodified territories and traditions), both historically and in the present moment. It seemed to me this focus could potentially help reorient our thinking, both about works of art and about the CMA’s collection.

I knew at the outset that the exhibition would likely engage a large sculptural installation by the late Siah Armajani, “Streets #40” (1993) — a work that gathers several interrelated (but formally separate) infrastructures of enclosure, from the railway system and border outposts to middle-class suburbia. With Armajani as our starting point, we scanned the collection for other examples and case-studies in the “art of enclosure” and other models of common ingenuity, radical imagination and grassroots resistance. Students not only delved enthusiastically into the selection and study of permanent-collection works, but also connected with artists near and far, securing the loan of Claire Pentecost’s “Proposal for a New American Agriculture,” an American flag that had been buried in a vermicomposting bin for a period of months, emerging threadbare; and commissioning a powerful meditation on Black futurity by Oakland-based artist Binta Ayofemi. Together, we envisioned an ambitious series of “para-curatorial” projects, which would have taken place both inside and outside the museum, involving local farmers, flower growers and filmmakers. Additionally, Columbus-based artists Michael Mercil (a former student of Armajani’s) and Suzanne Silver each contributed installations in response to “Streets #40” that explore the powers of language and collective speech to resist containment.

My students — the group consisted of Kat Arndt, Liz HeiseGlass, Dan Leizman, Julia Matejcek, Bryan Ortiz, Ilayda Ustel and Akeylah Wellington — gave our CMA exhibition a simple title, “A Primer on the Commons.” In the spirit of the exhibition, here is the description of the show we collectively authored:

Over the past year, social distancing has turned our world upside-down: private homes have become temporary workplaces and quarantine zones, while offices, restaurants, and places of worship sit empty. For many, it has been a year of intense suffering. It has also been a time of public grief and outrage, as movements to defend Black, Latinx, Indigenous, and Asian American lives have confronted systemic racism, police brutality, and xenophobia.

At the intersection of these crises, the commons — a term designating spaces and relationships outside and beyond private ownership — has reemerged as a political and social ideal. Through collective rituals and acts of radical altruism, and from mutual aid groups to free community refrigerators, ordinary people have reimagined their neighborhoods, cities, and social networks as self-supporting ecosystems, connecting friends, families, and strangers in a web of care.

In sympathy with these efforts, "A Primer on the Commons" draws from CMA’s contemporary collection to explore — and critically expose — the systems that enclose, confine, and disempower us. Organized by a collective of students, and featuring contributions from artists, activists, and community members near and far, the exhibition proposes the commons as a space of refuge, solidarity, and collective liberation in times of crisis.

The exhibition was temporary — it ran from May to November 2021 — but the crisis of the commons endures.