STATEMENT FROM THE DEPARTMENT OF HISTORY OF ART

STATEMENT FROM THE DEPARTMENT OF HISTORY OF ART 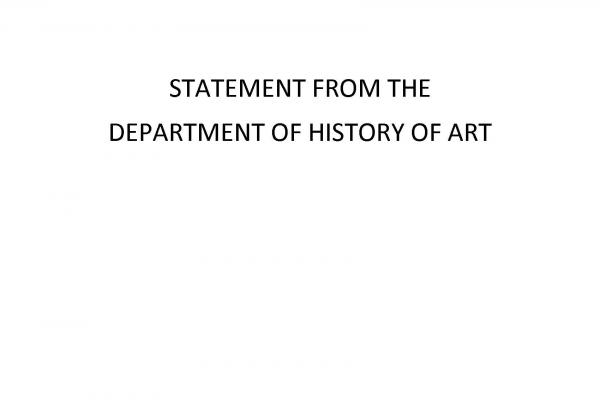 The Department of History of Art stands in solidarity with all in our community fighting for an equitable, just, and anti-racist society. We are outraged at the violence that continues to be enacted against people of color in our country, our city, and at our university. Black Lives Matter.

As a department with an overwhelmingly white faculty, we acknowledge the role of our community and the discipline of art history in ignoring and upholding systems of white supremacy and violence, and know that we need to do the hard work of learning, listening, and changing. We commit to this work: to enact substantial change within our own department and to support those who are fighting racism in our university and city.

The field of art history was built through racist violence, including the widespread theft of artworks around the world for display in Western institutions, the diminishing of the cultural value of non-white artists, and acts of racism and exclusion against scholars of color. We acknowledge this history, and commit both to educating our students about it and to shaping a future art history that is actively anti-racist.

Ohio State must implement anti-racist policies that acknowledge the role of our institution in the perpetuation of white supremacy and violence against BIPOC (Black, Indigenous, and People of Color). The members of our department support the following movements within Ohio State:

-We support Ohio State students who are calling for OSU to end its relationship with the Columbus Police Department. CPD has demonstrated, both in its long history of violence towards people of color and in its recent violent responses to peaceful protest, that it cannot be trusted to keep the Ohio State community safe.

-We demand that Ohio State divest funds from the numerous corporations that profit from mass incarceration and policing.

-We call upon the recently formed University Task Force on Reviewing Racial Disparities at OSU to prioritize reviewing and transforming OSU’s own labor practices, particularly where privatization has had a negative impact on staff of color at the lowest end of the pay scale.

-We encourage our students to listen to and learn from the work being done by faculty of color across the university, and to take courses offered by the Department of African and African American Studies and the Ethnic Studies Program that address systemic racism and its pervasive role in our history and culture. We urge the university to increase its investment in these programs and faculty.

-We appreciate and acknowledge the efforts being taken by student groups, departments, and centers who are leading this work, not through gestures but through action. In particular, we are inspired by the words and actions of OSU students and faculty demanding change through protests of all kinds.

-During a time of budget cuts because of the public health crisis, we urge the university NOT to decrease funding for initiatives that attract and retain students of color, such as the Initiative on Access and Affordability and the Buckeyes First Program.

IN THE HISTORY OF ART DEPARTMENT

As part of our commitment to changing our own departmental culture and engaging in meaningful conversation and action, we commit to the following departmental initiatives:

-We commit to sponsoring an ongoing series of guest lectures, workshops, and study groups that focus on Art History’s role in upholding white supremacy within and beyond the academy and ask how as a discipline, Art History might work toward dismantling this order instead. This programming will bring students and faculty together to engage in the collective process of developing and implementing explicitly anti-racist scholarship and teaching practices.

-We commit to including more artists of color, discussions of race and ethnicity, and explorations of art history’s role in shaping racist discourses in our course offerings, from introductory surveys to upper level and graduate courses.

-We commit to implementing mandatory bias intervention training for anyone who is teaching within the department. The Committee for Diversity and Inclusion is also willing to work with individuals who have further questions about bias intervention strategies.

-We commit to include language in all department syllabi that addresses bias, for example stating that discriminatory language or activity will not be tolerated, and that the classroom should be a safer place for minority students.

-We commit funding for BIPOC Graduate Students to have a daytime retreat, to promote community-building and dialogue, a practice that has been successfully instituted in departments such as WGSS.

-We commit to make diversity a top priority for future faculty hires in the department. This would supersede other concerns such as region, time period, or overlap in area of research.

-Because anti-racist work is an ongoing practice, we commit to implementing systems that will allow students to submit feedback to faculty and staff regarding their experiences around diversity, inclusion, and discrimination in the department without fear of retaliation. A proposed system includes:

-An annual climate survey, which will ask current students (graduate and undergraduate) and recent alumni about their perceptions of departmental climate, their experiences of bias in the classroom and department, and their suggestions for ways to make the department and its affiliated spaces safer and more inclusive for BIPOC department members.

-A platform, like a suggestion box, that will allow graduate and undergraduate students to confidentially share discriminatory incidents and other concerns. These responses will be regularly read and addressed by the Department Committee for Diversity and Inclusion.

-In order for these suggestions and concerns to lead to meaningful change, a system of accountability will be put into place to ensure that all feedback is heard and acknowledged by the department. This system will not only allow for moments of reflection and learning as individuals, but also ensure the positive growth of the department as a whole.