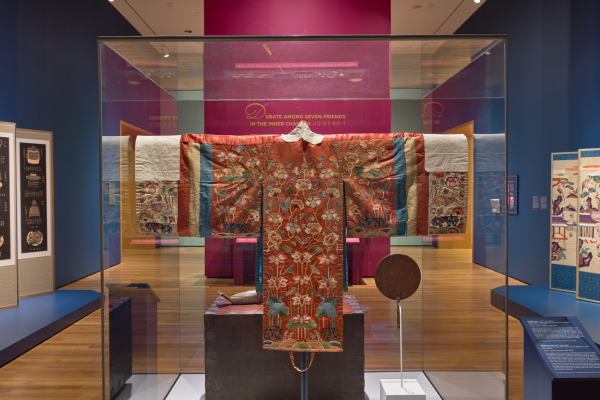 The Institute for Korean Studies presents:

In the Korean Peninsula, embroidery arts flourished as commodities of luxury for ruling elites as well as sacred objects in Buddhist religious practices since the Three Kingdoms Period (57 BC−AD 668). Yet, most surviving examples are dated to the Joseon dynasty (1392-1910), a period where the division between men and women, as well as their corresponding jobs, Korean embroidery arts have been discussed conventionally as the product of women’s leisure activity. Furthermore, the distinctive aesthetic elements and artistic expressions of embroidery art from this period have been simply considered “folkcraft,” in contrast with fine or high art. This presentation explores the issues of gender and socio-economic diversity and complexity within the tradition of Korean embroidery by debunking some of existing misconceptions in the current state of the field. The exhibition ‘Gold Needles: Embroidery Arts from Korea,’ which I have curated at the Cleveland Museum of Art (from 8 March to 26 July 2020) will serve as a case study to examine the limits of the current scholarship and to build new contextual trajectories for Korean embroidery arts.

Sooa Im McCormick is Curator of Korean Art at the Cleveland Museum of Art. McCormick holds a PhD from the University of Kansas and Master’s degree from the Rutgers University. Recently, she curated the exhibition Gold Needles: Korean Embroidery Arts. Her previous exhibitions include Chaekgeori: Pleasure of Possessions in Korean Painted Screens (2017). Her next curatorial project will examine the art of the Goryeo dynasty from comparative and global perspectives. While pursuing her curatorial career, McCormick remains active as a researcher. Her recent publications include “The Politics of Frugality: Environmental Crisis and Eighteenth-Century Korean Visual Culture,” Korea at Nature’s Edge (Cornell University Press, 2021).

Free and Open to the Public

If you require an accommodation, such as live captioning, to participate in this event, please contact Stephanie Metzger at metzger.235@osu.edu or 614-247-4725. Requests made at least one week in advance of the event will generally allow us to provide seamless access, but the university will make every effort to meet requests made after this date.

This event is supported by a U.S. Department of Education Title VI grant to The Ohio State University East Asian Studies Center.